Tonia Sue Berry aka Tonia Sue Knowlton, the daughter of deceased Indiana KKK leader (and police informant) Jeff Berry is likely to move from George Bois Stout’s De Kalb, Texas compound back to the Fort Wayne area where she grew up. Some background on the Stouts here.

Tonia’s father was the Klan leader Jeff Berry (as seen on the 1990’s Jerry Springer show) who infamously was sent to jail for kidnapping journalists and was nearly beaten to death by his own son (one theory goes that it was in response to Jeff being a police informant).

Tonia has since then seemingly left her first Klan husband Walter Knowlton (with whom she had a child that they named so that their child’s initials formed “K.K.K.”).

Tonia at some point divorced her first Klan hubby to move to Texas to be with a new Klan hubby,  Dalton Henry Stout. Here she resided with her husband and her father in law as they formed the Church of the KKK.

Tonia was/is the top recruiter for the Church of the KKK, coordinating “unity” events in Indiana, Texas, and other states to form new bonds and networks.

She is morphing her involvement in the Church of the KKK, as run by George into a new outfit or a re-branded effort entitled Aryan Freedom Network. 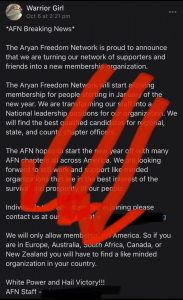 AFN is partnering with Chris Pohlhaus “The Hammer” of the Bloodtribes network to put on a charity for “needy white families.”

Chris Pohlhaus was also recently pushing a scheme to move from Texas (a state shared by himself and the Stouts) into states north and east of Texas, in Chris’s case it is Maine.

Local Indiana anti-carceral organizers would rather highlight this effort by Indiana Department of Corrections Watch to overshadow the white supremacist attempt at charity.  If Tonia Sue Berry’s hate is abhorrent to you, please give to IDOC Watch so that victims of the carceral system can be made more whole.  Take that hateful energy Chris Pohlhaus and Tonia Berry have and transform it into care for your community.

Back in April of 2021 The Church of the KKK put on a meet and greet on private property outside of Auburn, IN.  They met away from the public eye as the last time the Klan showed up in public, they were beaten up.  Local anti-racist organizers dwarfed the Klan’s crowd-size that day at the Auburn courthouse with a food drive and community coming together under the protection of armed community defense anti-fascists. 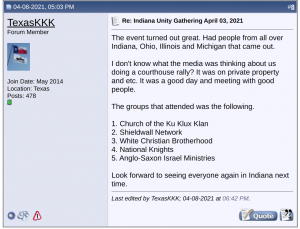 Despite the blusterous claims in the image left that was taken from their forums, their turnout was low for this Indiana event. You should replace “groups” with “persons.” Meaning that rather than five groups being present; five people were present.

The counter event, a day of a solidarity against hate and a community food drive far outpaced their numbers and was able to turn the Klan’s hateful visit to Auburn into an opportunity to help anti-racists network and provide for their communities.  The counter event was organized by Indiana Mutual Aid Coalition.

Tonia would go on to put on two more similar events before forming the AFN.  She can been seen in hate centered social media channels as her own VK account, or White Lives Matter Telegram (both Indiana and Texas) channels.  She is active in both channels, spreading hate and trying to network with other racists.  We can only wonder if the other racists in these telegram channels would be comfortable organizing with the daughter who is proud of her police informant father. 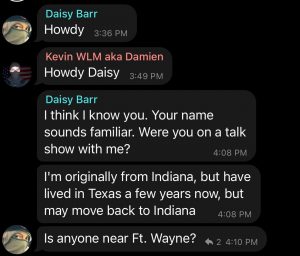 The Mid-west anti-racist networks that turned out in April to take a stand against hate should be made aware that Tonia is likely to be moving back.  And they should remain watchful and vigilant. And the mid-westerners on the side of social justice should let our mutual aid efforts, such as the IDOC Watch drive, outshine her pathetic attempt at charity.  Let the Klan or AFN or whatever hateful mask they adorn look in shame at how they are out-organized.